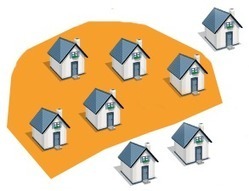 In the very early stages of vision—before we’re really conscious of it—our perceptual processes are humming away, attempting to organize the sensory data from our eyes into something that might be meaningful.Both the Gestalt psychologists and modern perceptual researchers realized that perception tends to organize information into wholes, rather than parts. For example, you’re most likely grouping the orange shapes above into an arrow, rather than seeing them as separate elements.

We can take advantage of this early perceptual organization so viewers will perceive and understand our visuals correctly and rapidly. One powerful way to impart meaning is through visual grouping. Becoming aware of these principles can also prevent viewers from misinterpreting your visuals from unintended groupings.

Then goes on to discussexamples of  Grouping by Boundary or Enclosure, by Proximity, by Similarity,  by Connectedness and by Common Fate