Mobile learning, or m-learning, refers to any learning intervention that is carried out through the use of mobile devices and wireless technology.
Ever since the concept of mobile learning came into the picture, instructional designers have been coming up with innovative ideas to create effective and meaningful ways to harness the power of mobile learning. It started with focused efforts to convert existing e-learning to m-learning.
Subsequently, educational technology companies now design effective and meaningful mobile learning tools by addressing various challenges associated with delivering content on mobile devices. This article introduces these challenges and discusses some strategies to design effective m-learning.
Full Text: How To Develop Your Own Mobile Learning Tools | Edudemic. We all love being mobile. Especially anyone involved in online education. The fact that we can finish assignments and tune in to lectures from anywhere with an internet connection is pretty incredible, and it marks a turning point in the way students will pursue education in the future. But, the one drawback to having a mobile device is the fact that it can pose a huge amount of distraction when you truly need to buckle down and get some work done. There are plenty of ways, though, that students can hold on to their mobiles while staying focused. It just takes a little extra effort and some helpful tips. END_OF_DOCUMENT_TOKEN_TO_BE_REPLACED

Via Mashable
Everpix for iPhone Everpix automatically stores and organizes all of your photos in one spot. As of Wednesday, it has an iPhone app that will automatically add your mobile photos to the same spot. In addition, the app gives you access to all of your photos on the go. Free. With about 500,000 apps in the Apple App Store and an estimated 300,000 apps in the Android Market, finding the gems among the virtual haystack can be full-time job. The good news is that it’s our full time job. We’ve trekked through the overly frivolous, the ugly and the downright impractical in our search for these five recently launched apps worth downloading in the slideshow above. We hope you enjoy this week’s top picks. They include new takes on mobile video, food searching and children’s books. There’s also an app that lets you access your entire photo library from your phone and another that will automatically tag your photos with the subjects’ names. More About: apps , Everpix , Everything Butt Art , face.com , foodspotting , Klik , showyou
Continue Reading:
The 5 Best New Apps This Week

Via Mashable
Gorilla Glass manufacturer Corning has unveiled a follow-up YouTube video to its wildly successful “A Day Made of Glass,” providing another look into what the future could be like with the growth of glass touchscreen interfaces, from innovative chalkboards and activity tables in classrooms to uses for it in hospitals. Corning released two versions of “A Day Made of Glass 2″ — one with a narrator and another, abbreviated version without commentary — the video follows the life of young Amy and her family as they go through their day using various products made of glass. Amy does classwork on a glass tablet, controls the temperature of the car from the backseat and even attends a field trip at the Redwood Forrest with an interactive signage that brings learning to life. Her teacher also works with students on interactive touchscreen activity tables. Corning expects these activity tables to be rolled out in the near future. Last year’s video , which followed the same family, brought in over 17 million hits on YouTube and left many in awe of Corning’s interpretation of what’s possible with photovoltaic glass, LCD TV glass, architectural display and surface glass, among others. However, many left comments on YouTube asking which technology is actually possible with today’s resources and pricing. This time around, though, new technologies and applications are highlighted, such as glass tablets, multitouch-enabled desks, solar panels, augmented reality, electronic medical records and anti-microbial medical equipment. Corning may be making headlines these days for its Gorilla Glass product — a super-strong, lightweight glass which can withstand drops and mistreatment — but it’s hardly a new company and no stranger to innovation. In fact, the 160-year-old business even worked with Thomas Edison to create inexpensive glass for his lightbulbs. However, Corning noted at the press screening that there are several challenges the company is facing this year, largely due to lower LCD glass prices, higher corporate tax rates and declining equity earnings, which have combined to lower Corning’s profitability. Although LCD glass sales are likely to be flat through 2014, the company said it will remain profitable and continue to generate large amounts of cash. Last week, Corning announced that it raked in record 2011 sales of $7.9 billion and plans to grow profits to $10 billion by 2014. The company also recently announced that it is joining forces with Samsung Mobile to manufacture Lotus Glass for Galaxy-branded smartphones and Super OLED TVs. Corning’s ultra-slim, eco-friendly Lotus Glass is known for strong performance and withstanding higher-processing temperatures. Although Corning’s first “A Day Made of Glass” video was unveiled a week ago this year, Corning’s vice chairman and CFO James Flaws told Mashable that he couldn’t comment on whether or not the clips will become an annual tradition. “You can expect more from us though,” Flaws said. More About: Corning , gorilla glass , smartphones , tablets , trending , TVs , YouTube For more Social Media coverage: Follow Mashable Social Media on Twitter Become a Fan on Facebook Subscribe to the Social Media channel Download our free apps for Android , Mac , iPhone and iPad
Excerpt from:
Is This The Future of Touchscreen Tech? New Video Will Blow Your Mind

Mobile phones are ubiquitous among students, both in college and K-12. And while some schools shun the use of cell phones, others are embracing them as a powerful tool. Marketing, learning, and mobile access are just some of the ways academia is taking advantage of what mobile has to offer. Read on, and we’ll take a look at nine interesting ways that mobile devices are making their way into academia. END_OF_DOCUMENT_TOKEN_TO_BE_REPLACED

Via Scoop.it – The eLearning Site
Whether we are in the car, on the train, at work, or in a classroom, mobile technology in particular is giving us the ability to learn on-the-go. See the infographic below to learn why we are wired for mobile learning, and how we …
Via interactyx.com 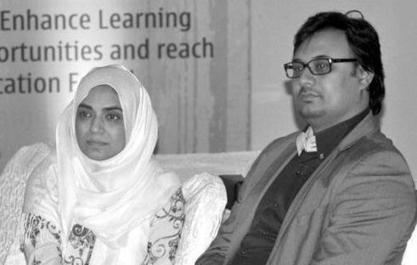 PESHAWAR (December 22, 2011) : Nokia Pakistan and Unesco on Thursday launched the project.
Via www.ptclworkers.com