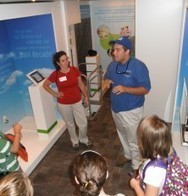 A more flexible approach to knowing and learning is offered by mobile learning devices because you don’t confine the process in a single area like the four corners of the room. Since the younger generation is now getting …
Via edutechintegration.com